If you've ever sat in one of my classes or seen my notes, you'll have come across my personal brand of shorthand. As I explain almost every semester to one class or other, I developed it as I worked through my master's program in history. I found myself reading and taking notes on roughly three historical monographs per week, and it behooved me to come up with a more efficient and thoroughly referenced system than what I used to scrape by during my undergrad.

I could have learned Gregg or another established system, but I didn't want to learn a general purpose system using phonetics, I wanted to make my history notes more efficient (and remember, I didn't have any time to learn a whole system, which is why I needed shorthand in the first place). Therefore, my system is customized to notes for history and social studies. If you're in a different discipline or looking to develop a broader system, you'll need to adapt as such.

In developing a system, remember to focus on remove as many pen strokes as you can from each phrase or term that you repeat. Borrow if you can from other systems of knowledge that you subscribe to. For example, I've borrowed a couple of strokes from Gregg, and a few from programming logic (e.g., "!" means "not", as in programming, an exclamation point is a negative in a logic equation).

Note: In no way is this comprehensive. Additionally, this is an index of symbols that I currently use. I've experimented with many and do not use them for every set of notes I take, just where time is of the essence. I am always developing new forms.

If this were versioned like software, this index would be something like version 0.9a (meaning that it isn't a complete system, and that it's in the alpha/testing stage). Again, this is not exhaustive. 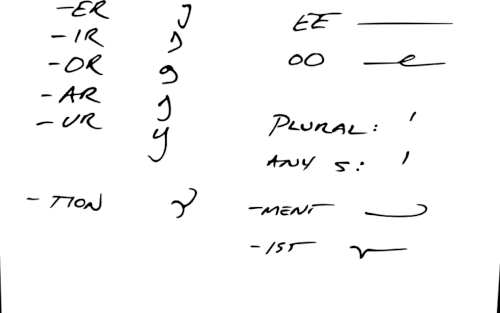 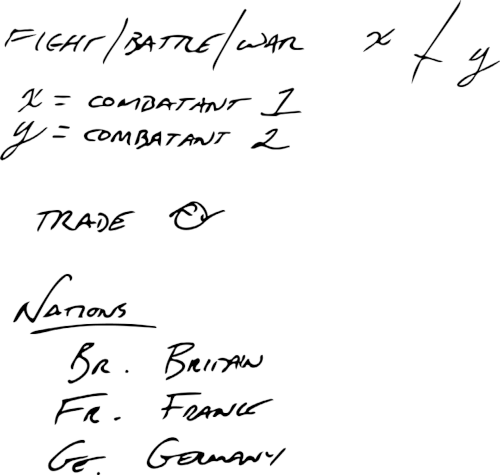 For the fight/battle/war note (it's supposed to look like a sword, by the way), note that any conflict, including one between two individuals, can be summed up this way. Superscript to the symbol, I often add a year before and after the sword to note the beginning and end of the conflict respectively. Lists of allies can be made on either side of the sword as well.

Note: Abbreviations for modern nations follow (for the most part) internet ccTLD assignments.

Olivia
APGOV, in a discussion about President Truman
2/1/2021