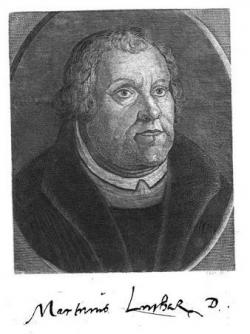 From the inside of the book. Martin Luther.

This is sourced from First Principles of the Reformation, Or, The Ninety-five Theses and the Three Primary Works of Dr. Martin Luther Translated Into English.1

DISPUTATION OF DE. MARTIN LUTHER CONCERNING PENITENCE AND INDULGENCES. In the desire and with the purpose of elucidating the truth, a disputation will be held on the underwritten propositions at Wittenberg, under the presidency of the Reverend Father Martin Luther, Monk of the Order of St. Augustine, Master of Arts and of Sacred Theology, and ordinary Reader of the same in that place. He therefore asks those who cannot be present and discuss the subject with us orally, to do so by letter in their absence. In the name of our Lord Jesus Christ. Amen.

Want to see a banana I turned into Elvis?