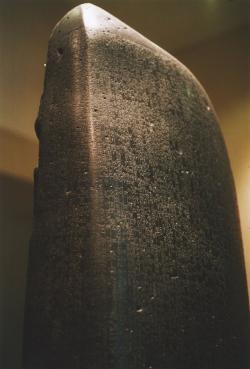 The Code was inscribed on a stone stele (a standing block) that was over seven feet tall. Photograph by Rama, Wikimedia Commons, Cc-by-sa-2.0-fr.

Below is a translation of Hammurabi's Code. Footnotes are from the text that I transcribed this from.1

When Anu,2 the majestic, King of the Anunnaki,3 and Bel,4 the Lord of Heaven and Earth, who established the fat of the land, had given to Marduk,5 the ruling son of Ea,6 dominion over mankind, magnified him among the Igigi;7 and called Babylon by his great name; when they made it great upon the earth by founding therein an eternal kingdom, whose foundations are as firmly grounded as are those of heaven and earth,—it was then that Anu and Bel called me, Hammurabi, the exalted prince, a God-fearing man, by name, to cause justice to be practiced in the land, to destroy the wicked and the evil [alike], to prevent the strong from oppressing the weak, so that I might go forth like Shamash8 to rule over the Black-haired people, to give light to the land, and, like Anu and Bel, promote the welfare of makind.

I am Hammurabi, the prince called by Bel to pour out riches and abundance, procuring everything possible for Nippur9 and Durilu,10 the majestic patron of E-kur,11 the brave king who restored Eridu,12 and purified the cult of E-apsu;13 who subjected the four quarters of the world, and made great the name of Babel, and made glad the heart of Marduk, his lord; and who daily worships in Esaglia,14 the royal scion, begotten by Sin,15 who enriched Ur;16 the pious, the submissive one, who brings riches to Gish-shir-gal;17 the wise king favored by Shamash; the powerful one, who laid again the foundations of Sippar:18 who clothed with green the tomb [or shrines] of Malkat;19 who beautified E-bab-bar,20 which is built like a heavenly place; the warrior, who protected Larsa,21 and rebuilt E-bab-bar for Shamash, his helper; the lord, who gave life to the city of Uruk;22 and brought abundance of waters to its inhabitants; who built up the towers of E-anna,23 who brought riches to Anu and Nana;24 the shield of the land; who again reassembled the scattered inhabitants of Isin25 [Nisin], who enriched E-gal-mah;26 the patron king of the city, the brother of Za-ma-ma;27 who firmly established the settlements of Kish;28 who surrounded the E-me-te-ur-sag29 with glory; who increased the sacred treasures of Nana, the patron of the temple of Harsag-Kalama,30 the grave of the enemies; whose help brings victory;31 who enriched the places of Cutha;32 who made everything glorious in E-shid-lam;33 the mighty bull,34 which trampled down his foes....

[The text continues, discussing Hammurabi's notable contributions to religious institutions, defense of his people, and economic benefits to those under his rule.]

When Marduk sent me to rule over men, to grant protection to the land, then I put law and righteousness in the mouth of the people, and brought well-being to my subjects.

1. If a man make a false accusation against a man putting a ban upon him and can not prove it, then the accuser shall be put to death.

2. If a man charge a man of being a sorcerer, and is unable to sustain such a charge, the one who is accused shall go to the river he shall plunge himself into the river, and if he sink into the river, his accuser shall take his house. If, however, the river show forth the innocence of this man and he escape unhurt then he who accused him of sorcery, shall be put to death, while he who plunged into the river shall appropriate the house of his accuser.35

3. If a man (in a case pending judgment) threaten the witnesses, or do not establish that which he has testified, if that case be a case involving life, that man shall be put to death.

4. If a man offer as a bribe grain or money to witnesses, he himself shall bear the sentence of the court in that case.

7. If a man buy silver, gold, slave, male or female, ox, sheep, donkey, or anything whatsoever from the son or slave of any person, without witness or contract, or receive the same on deposit, he is regarded as a thief, and shall be put to death.36

8. If a man steal an ox, or sheep, or donkey, or pig, or boat, from a temple or palace, he shall pay thirtyfold; if it be from a freeman, he shall pay tenfold. If the thief has nothing with which to pay, he shall be put to death.37

14. If a man steal the minor son of a freeman, he shall be put to death.

16. If a man conceal in his house a male or female slave, a fugitive from the palace, or from a freeman, and do not produce the same at the order of the officer, the master of that house shall be put to death.

17. If a man find a fugitive slave, male or female, in the open country, and brings the same to the owner, the owner of said slave shall pay that man two shekels of silver.

21. If a man make a breach into a house, one shall kill him in front of the breach, and bury him in it.

25. If a fire break out in a man's house, and any one who goes to put out the fire shall lift up his eyes towards the owner's property and take any property [furniture] of the owner of the house, he shall be cast into that same fire.

42. If a man rent a field for tilling and raise no crops; then he shall be called to account for not having cultivated the field, and [if convicted] he shall deliver grain to the owner of the field, in proportion to the yield of the adjacent fields.

45. If a man let his field to another for a fixed rent, and has received the rent for the field, but storms come and destroy the crops, the loss falls upon the renter.

53. If any one neglect to keep his dyke in proper condition and do not strengthen his dyke, and if a breach take place, and the meadow-land be inundated by the water the man in whose dyke the breach has taken place, shall pay back for the grain which was thereby destroyed.

117. If a man incur a debt and sell his wife, son, or daughter for money, or bind them out to forced labor, three years shall they work in the house of their taskmaster; in the fourth year they shall be set free.

129. If a man's wife be caught lying with another man, both shall be bound and thrown into the water unless the husband of that woman desire to pardon his wife, or the king his servant.

130. If any one violate the wife [betrothed] of a man, who has not known a man, but who is still living in the house of her father, and he lie with her and be caught he shall be put to death but the woman shall go free.

131. If a man have accused his own wife but she has not been caught lying with another man she Shall swear by the name of God and then may return to her father's house.

132. If the finger have been pointed against a man's [i.e., if she have been suspected], but she have been caught lying with another man she shall into the river for her husband's [satisfaction].

133. If a man be taken captive in war, and there is sustenance in his house and his wife have left his house and court and have entered the house of another, because that woman has not guarded her body, but entered another's house, she shall be condemned according to law and thrown into the waters.

134. If a man have been taken captive in war, and there be no sustenance in his house, when the wife of this man enter another's house [marry another man]; this woman incurs no penalty.

142. If a wife quarrel with her husband and say, Thou shalt not possess me; then the reasons for her prejudices must be examined. If she be without blame, and there be no fault on her part, but her husband have been tramping around belittling her very much, then this woman shall be blameless, she shall take her dowry and return to the house of her father.

160. If a man bring presents into the house of his father in law, and give a dowry; if then the girl's father say, "I will not give my daughter to you;" then he shall give back fully all that was given him.

162. If a man take a wife and she bear him children, and if that woman die, her father may have no claim on her dowry. It belongs to her children.

168. If a man decide to thrust out [disinherit] his son and say to the judge, "I will thrust out my son;" then the judge shall examine into his reasons, and if the son have no grievous fault, which justifies his being thrust out, the son may not be cut off from sonship.

181. If a father devote a temple maid or temple-virgin to a god, and give her no dowry, after the death of her father she shall receive from the estate of her father as her share, one third of a son's portion, to enjoy it as long as she lives. After her it belongs to her brothers.

188. If an artisan adopt a child and teach him his trade, no one can demand him back.

189. If he have not taught him a trade, the adopted child may return to his father's house.

195. If a son strike his father one shall cut off his hands.

196. If a man destroy the eye of another man, one shall destroy his eye.

200. If a man knock out the teeth of a man who is equal in rank one shall knock out his teeth.

204. If a freeman strike a freeman, he shall pay ten shekels of silver.

205. If the slave of a freeman strike a freeman, one shall cut off his ear.

209. If a man strike a free born woman and produce a miscarriage, he shall pay ten shekels of silver for the loss [of that in her womb].

210. If that woman die, one shall put his daughter to death.

218. If a physician treat a man for a severe wound with a bronze knife and kill him, or if he open an abscess near the eye and destroy the eye, one shall cut off his hands.

249. If a man hire an ox and a god strike it, and it die, the man who hired it shall swear before God in open court and he shall be acquitted.

250. If an ox, while passing through the streets [market] gore and kill a man, this case is not subject to litigation.

Hey, don't raise your voice at me.

Gabriel
US History, as I quietly explained how to resize a text box
3/23/2021