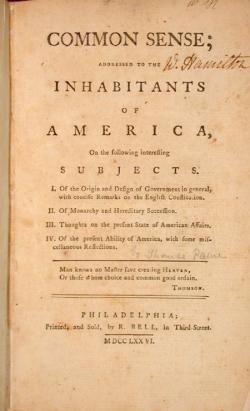 Scan of cover of Common Sense, the pamphlet.

This excerpt is sourced from HERB at CUNY.1

In the following pages I offer nothing more than simple facts, plain arguments, and common sense. . . .

I have heard it asserted by some, that as America has flourished under her former connection with Great-Britain, the same connection is necessary towards her future happiness, and will always have the same effect. Nothing can be more fallacious than this kind of argument. We may as well assert that because a child has thrived upon milk, that is never to have meat, or that the first twenty years of our lives is to become a precedent for the next twenty. But even this is admitting more than is true; for I answer. . . that America would have flourished as much, and probably much more, had no European power taken any notice of her. The commerce by which she hath enriched herself are the necessaries of life, and will always have a market while eating is the custom of Europe.

But she has protected us, say some. . . . We have boasted the protection of Great Britain, without considering, that her motive was interest not attachment. . . . This new World hath been the asylum for the persecuted lovers of civil and religious liberty from every part of Europe. . . . As Europe is our market for trade, we ought to form no partial connection with any part of it. It is the true interest of America to steer clear of European contentions, which she never can do, while, by her dependence on Britain, she is made the make-weight in the scale of British politics.

Europe is too thickly planted with Kingdoms to be long at peace, and whenever a war breaks out between England and any foreign power, the trade of America goes to ruin, because of her connection with Britain. . . . There is something absurd, in supposing a Continent to be perpetually governed by an island. . . .

No man was a warmer wisher for a reconciliation than myself, before the fatal nineteenth of April, 1775 [the day of the battles of Lexington and Concord], but the moment the event of that day was made known, I rejected the hardened, sullen-tempered Pharaoh of England for ever; and disdain the wretch, that with the pretended title of FATHER OF HIS PEOPLE can unfeelingly hear of their slaughter, and composedly sleep with their blood upon his soul. . . .

Where, say some, is the king of America? I'll tell you, Friend, he reigns above, and doth not make havoc of mankind like the royal brute of Great Britain.... So far as we approve of monarchy. . . in America the law is king. . . .

A government of our own is our natural right. . . . Ye that oppose independence now, ye know not what ye do: ye are opening the door to eternal tyranny. . . . There are thousands and tens of thousands, who would think it glorious to expel from the Continent, that barbarous and hellish power, which hath stirred up the Indians and the Negroes to destroy us. . . .

O! ye that love mankind! Ye that dare oppose not only the tyranny but the tyrant, stand forth! Every spot of the old world is overrun with oppression. Freedom hath been hunted round the Globe. Asia and Africa have long expelled her. Europe regards her like a stranger, and England hath given her warning to depart. O! receive the fugitive, and prepare in time an asylum for mankind.

What are these called? Parabolas?