How the Other Half Lives (Excerpt) 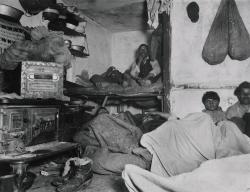 Photo by Jacob A. Riis: "Lodgers in a Crowded Bayard Street Tenement." Source.

Jacob Riis, a Danish immigrant, combined photography and journalism into a powerful indictment of poverty in America. His 1890, How the Other Half Lives shocked Americans with its raw depictions of urban slums. Here, he describes poverty in New York.1

Long ago it was said that “one half of the world does not know how the other half lives.” That was true then. It did not know because it did not care. The half that was on top cared little for the struggles, and less for the fate of those who were underneath, so long as it was able to hold them there and keep its own seat. There came a time when the discomfort and crowding below were so great, and the consequent upheavals so violent, that it was no longer an easy thing to do, and then the upper half fell to inquiring what was the matter. Information on the subject has been accumulating rapidly since, and the whole world has had its hands full answering for its old ignorance.

In New York … the boundary line of the Other Half lies through the tenements. … To-day three-fourths of its people live in the tenements, and the nineteenth century drift of the population to the cities is sending ever-increasing multitudes to crowd them. The fifteen thousand tenant houses that were the despair of the sanitarian in the past generation have swelled into thirty-seven thousand, and more than twelve hundred thousand persons call them home. The one way out he saw–rapid transit to the suburbs–has brought no relief. We know now that there is no way out; that the “system” that was the evil offspring of public neglect and private greed has come to stay, a storm-centre forever of our civilization. Nothing is left but to make the best of a bad bargain.

What the tenements are and how they grow to what they are, we shall see hereafter. The story is dark enough, drawn from the plain public records, to send a chill to any heart. If it shall appear that the sufferings and the sins of the “other half,” and the evil they breed, are but as a just punishment upon the community that gave it no other choice, it will be because that is the truth. The boundary line lies there because, while the forces for good on one side vastly outweigh the bad–it were not well otherwise–in the tenements all the influences make for evil; because they are the hot-beds of the epidemics that carry death to rich and poor alike; the nurseries of pauperism and crime that fill our jails and police courts; that throw off a scum of forty thousand human wrecks to the island asylums and workhouses year by year; that turned out in the last eight years a round half million beggars to prey upon our charities; that maintain a standing army of ten thousand tramps with all that that implies; because, above all, they touch the family life with deadly moral contagion. This is their worst crime, inseparable from the system. That we have to own it the child of our own wrong does not excuse it, even though it gives it claim upon our utmost patience and tenderest charity.

What are you going to do about it? is the question of to-day. It was asked once of our city in taunting defiance by a band of political cutthroats, the legitimate outgrowth of life on the tenement-house level. Law and order found the answer then and prevailed. With our enormously swelling population held in this galling bondage, will that answer always be given? It will depend on how fully the situation that prompted the challenge is grasped. Forty per cent of the distress among the poor, said a recent official report, is due to drunkenness. But the first legislative committee ever appointed to probe this sore went deeper down and uncovered its roots. The “conclusion forced itself upon it that certain conditions and associations of human life and habitation are the prolific parents of corresponding habits and morals,” and it recommended “the prevention of drunkenness by providing for every man a clean and comfortable home. Years after, a sanitary inquiry brought to light the fact that “more than one-half of the tenements with two-thirds of their population were held by owners veto trade the keeping of them a business, generally a speculation. The owner was seeking a certain percentage on his outlay, and that percentage very rarely fell below fifteen per cent., and frequently exceeded thirty. . . . The complaint was universal among the tenants that they were entirely smeared for, and that the only answer to their requests to have the place put in order by repairs and necessary improvements was that they must pay their rent or leave. The agent’s instructions were simple but emphatic: ‘Collect the rent in advance, or, failing, eject the occupants.”‘ Upon such a stock grew this upas-tree. Small wonder the fruit is bitter. The remedy that shall be an effective answer to the coming appeal for justice must proceed from the public conscience. Neither legislation nor charity can cover the ground. The greed of capital that wrought the evil must itself undo it, as far as it can now be undone. Homes must be built for the working masses by those who employ their labor; but tenements must cease to be “good property” in the old, heartless sense. “Philanthropy and five per cent.” is the penance exacted.

If this is true from a purely economic point of view, what then of the outlook front the Christian standpoint? Not long ago a great meeting was held in this city, of all denominations of religious faith, to discuss the question how to lay hold of these teeming masses in the tenements with Christian influences, to which they are now too often strangers. Might not the conference have found in the warning of one Brooklyn builder, who has invested his capital on this plan and made it pay more than a money interest, a hint worth heeding: “How shall the love of God be understood by those who have been nurtured in sight only of the greed of man?”

What are these called? Parabolas?