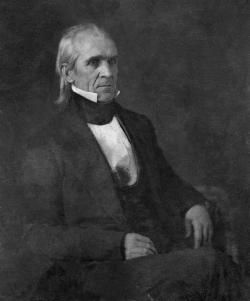 The Republic of Texas has made known her desire to come into our Union, to form a part of our Confederacy and enjoy with us the blessings of liberty secured and guaranteed by our Constitution. Texas was once a part of our country--was unwisely ceded away to a foreign power--is now independent, and possesses an undoubted right to dispose of a part or the whole of her territory and to merge her sovereignty as a separate and independent state in ours. I congratulate my country that by an act of the late Congress of the United States the assent of this Government has been given to the reunion, and it only remains for the two countries to agree upon the terms to consummate an object so important to both.

I regard the question of annexation as belonging exclusively to the United States and Texas. They are independent powers competent to contract, and foreign nations have no right to interfere with them or to take exceptions to their reunion. Foreign powers do not seem to appreciate the true character of our Government. Our Union is a confederation of independent States, whose policy is peace with each other and all the world. To enlarge its limits is to extend the dominions of peace over additional territories and increasing millions.

The world has nothing to fear from military ambition in our government. While the Chief Magistrate and the popular branch of Congress are elected for short terms by the suffrages of those millions who must in their own persons bear all the burdens and miseries of war, our Government can not be otherwise than pacific. Foreign powers should therefore look on the annexation of Texas to the United States not as the conquest of a nation seeking to extend her dominions by arms and violence, but as the peaceful acquisition of a territory once her own, by adding another member to our confederation, with the consent of that member, thereby diminishing the chances of war and opening to them new and ever-increasing markets for their products.

To Texas the reunion is important, because the strong protecting arm of our Government would be extended over her, and the vast resources of her fertile soil and genial climate would be speedily developed, while the safety of New Orleans and of our whole southwestern frontier against hostile aggression, as well as the interests of the whole Union, would be promoted by it.

In the earlier stages of our national existence the opinion prevailed with some that our system of confederated States could not operate successfully over an extended territory, and serious objections have at different times been made to the enlargement of our boundaries. These objections were earnestly urged when we acquired Louisiana. Experience has shown that they were not well founded. The title of numerous Indian tribes to vast tracts of country has been extinguished; new States have been admitted into the Union; new Territories have been created and our jurisdiction and laws extended over them. As our population has expanded, the Union has been cemented and strengthened. AS our boundaries have been enlarged and our agricultural population has been spread over a large surface, our federative system has acquired additional strength and security.

It may well be doubted whether it would not be in greater danger of overthrow if our present population were confined to the comparatively narrow limits of the original thirteen States than it is now that they are sparsely settled over a more expanded territory. It is confidently believed that our system may be safely extended to the utmost bounds of our territorial limits, and that as it shall be extended the bonds of our Union, so far from being weakened, will become stronger.

Whatever is good or evil in the local institutions of Texas will remain her own whether annexed to the United States or not. None of the present States will be responsible for them any more than they are for the local institutions of each other. They have confederated together for certain specified objects. Upon the same principle that they would refuse to form a perpetual union with Texas because of her local institutions our forefathers would have been prevented from forming our present Union.

Perceiving no valid objection to the measure and many reasons for its adoption vitally affecting the peace, the safety, and the prosperity of both countries, I shall on the broad principle which formed the basis and produced the adoption of our Constitution, and not in any narrow spirit of sectional policy, endeavor by all Constitutional, honorable, and appropriate means to consummate the expressed will of the people and Government of the United States by the reannexation of Texas to our Union at the earliest practicable period.

Nor will it become in a less degree my duty to assert and maintain by all Constitutional means the right of the United States to that portion of our territory which lies beyond the Rocky Mountains. Our title to the country of the Oregon is "clear and unquestionable," and already are our people preparing to perfect that title by occupying it with their wives and children. But eighty years ago our population was confined on the west by the ridge of the Alleghanies. Within that period--within the lifetime, I might say, of some of my hearers--our people, increasing to many millions, have filled the eastern valley of the Mississippi, adventurously ascended the Missouri to its headsprings, and are already engaged in establishing the blessings of self-government in valleys of which the rivers flow to the Pacific.

The world beholds the peaceful triumphs of the industry of our emigrants. To us belongs the duty of protecting them adequately wherever they may be upon our soil. The jurisdiction of our laws and the benefits of our republican institutions should be extended over them in the distant regions which they have selected for their homes. The increasing facilities of intercourse will easily bring the States, of which the formation in that part of our territory can not be long delayed, within the sphere of our federative Union. In the meantime every obligation imposed by treaty or conventional stipulations should be sacredly respected.

...for anyone willing to smell.