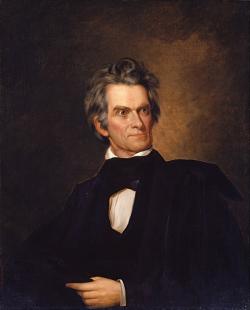 Time is acting for us; and if we shall have the wisdom to trust its operation, it will assert and maintain our rights with restless force, without costing a cent of money or a drop of blood. There is, often, in the affairs of government, more efficiency and wisdom in nonaction than in action. All we want to effect our object in this case is "a wise and masterly inactivity."

Our population is rolling toward the shores of the Pacific with an impetus greater than what we realize. It is one of those forward movements which leaves anticipation behind. In the period of thirty-two years which have elapsed since I took my seat in the other house, the Indian frontier has receded 1,000 miles to the west. At that time our population was much less than half what it is now. It was then increasing at the rate of about 250,000 annually; it is now not less than 600,000, and still increasing at the rate of something more than three percent compound annually. At that rate it will soon reach the yearly increase of 1 million.

If to this be added that the region west of Arkansas and the state of Missouri, and south of the Missouri River, is occupied by half civilized tribes, who have their lands secured to them by treaty (and which will prevent the spread of population in that direction), and that this great and increasing tide will be forced to take the comparatively narrow channel to the north of that river and south of our northern boundary, some conception may be formed of the strength with which the current will run in that direction and how soon it will reach the eastern gorges of the Rocky Mountains. I say some conception, for I feel assured that the reality will outrun the anticipation.

In illustration, I will repeat what I stated when I first addressed the Senate on this subject. As wise and experienced as was President Monroe, as much as he had witnessed of the growth of our country in his time, so inadequate was his conception of its rapidity, that near the close of his administration, in the year 1824, he proposed to colonize the Indians of New York and those north of the Ohio River and east of the Mississippi, in what is now called the Wisconsin territory, under the impression that it was a portion of our territory so remote that they would not be disturbed by our increasing population for a long time to come. It is now but eighteen years since, and already, in that short period, it is a great and flourishing territory, ready to knock at our door for admission as one of the sovereign members of the Union. But what is still more striking, what is really wonderful and almost miraculous, is that another territory (Iowa), still farther west (beyond the Mississippi) has sprung up as if by magic, and has already outstripped Wisconsin, and may knock for entrance before she is prepared to do so.

Such is the wonderful growth of a population which has attained the number ours has, yearly increasing at a compound rate, and such the impetus with which it is forcing its way, resistlessly, westward. It will soon, far sooner than anticipated, reach the Rocky Mountains and be ready to pour into the Oregon territory, when it will come into our possession without resistance or struggle; or, if there should be resistance, it would be feeble and ineffectual.

We should then be as much stronger there, comparatively, than Great Britain, as she is now stronger than we are; and it would then be as idle for her to attempt to assert and maintain her exclusive claim to the territory against us as it would now be in us to attempt it against her. Let us be wise and abide our time; and it will accomplish all that we desire with more certainty and with infinitely less sacrifice than we can without it.

I'm trying to figure out who the bald guy in the picture is.