A Letter on the Electoral College 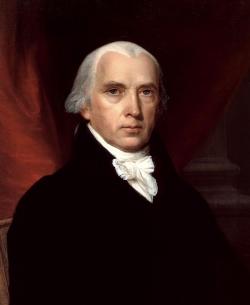 I have recd. your letter of the 11th. with the Newspapers containing your remarks on the present mode of electing a President, and your proposed remedy for its defects. I am glad to find you have not abandoned your attention to great Constitutional topics.

The difficulty of finding an unexceptionable process for appointing the Executive Organ of a Govt. such as that of the U.S. was deeply felt by the Convention; and as the final arrangement of it took place in the latter stage of the Session, it was not exempt from a degree of the hurrying influence produced by fatigue & impatience in all such bodies; tho’ the degree was much less than usually prevails in them.

The part of the arrangement which casts the eventual appointment on the H. of Rs. voting by States, was, as you presume, an accomodation to the anxiety of the smaller States for their sovereign equality, and to the jealousy of the larger States towards the cumulative functions of the Senate. The agency of the H. of Reps. was thought safer also than that of the Senate, on account of the greater number of its members. It might indeed happen that the event would turn on one or two States having one or two Reps. only; but even in that case, the Representations of most of the States being numerous, the House would present greater obstacles to corruption, than the Senate with its paucity of Members. It may be observed also, that altho’ for a certain period the evil of State votes given by one or two individuals would be extended by the introduction of new States, it would be rapidly diminished by growing populations within extensive territories. At the present period, the evil is at its maximum. Another Census will leave none ⟨of⟩ the States existing or in embryo, in the numerical rank of R. Island & Delaware: Nor is it impossible that the progressive assimilation of local Institutions, laws, & manners, may overcome the prejudices of those particular States agst. an incorporation with their neighbours.

But with all possible abatements, the present rule of voting for President by the House of Reps. is so great a departure from the republican principle of numerical equality, and even from the federal rule which qualifies the numerical, by a State quality, and is so pregnant also with a mischievous tendency in practice, that an amendment of the Constitution on that point is justly called for by all its considerate & best friends.

I agree entirely with you in thinking that the election of Presidential Electors by districts, is an amendment very proper to be brought forward at the same time with that relating to the eventual choice of President by the H. of Reps. The district mode was mostly, if not exclusively in view when the Constitution was framed & adopted; and was exchanged for the general ticket & the Legislative election, as the only expedient for baffling the policy of the particular States which had set the example. A constitutional establishment of that mode will doubtless aid in reconciling the smaller States to the other change which they will regard as a concession on their part. And it may not be without a value in another important respect. The States when voting for President by general tickets or by their Legislatures, are a string of beeds: When they make their elections by districts, some of these differing in sentiment from others, and sympathizing with that of districts in other States, they are so knit together as to break the force of those Geographical & other noxious parties which might render the repulsive too strong for the cohesive tendencies within the political System.

It may be worthy of consideration whether in requiring elections by districts, a discretion might not be conveniently left with the States to allot two members to a single district. It would manifestly be an important proviso, that no new arrangement of districts should be made within a certain period previous to an ensuing election of President.

Of the different remedies you propose for the failure of a majority of Electoral votes for any one Candidate, I like best that which refers the final choice to a joint vote of the two Houses of Congress, restricted to the two highest names on the Electoral lists. It might be a question, whether the three instead of the two highest names, might not be put within the choice of Congress; inasmuch as it not unfrequently happens, that the Candidate third on the list of votes, would in a question with either of the two first, outvote him, & consequently be the real preference of the Voters. But this advantage of opening a wider door and a better chance to merit, may be outweighed by an increased difficulty in obtaining a prompt & quiet decision by Congress, with three candidates before them, supported by three parties, no one of them making a majority of the whole.

The mode which you seem to approve of making a plurality of Electoral votes a definitive appointment, would have the merit of avoiding the Legislative Agency in appointing the Executive. But might it not by multiplying hopes & chances, stimulate intrigue & exertion, as well as incur too great a risk of success to a very inferior candidate? Next to the propriety of having a President the real choice of a majority of his Constituents, it is desireable that he should inspire respect & acquiescence by qualifications not suffering too much by comparison.

I cannot but think also that there is a strong objection to undistinguishing votes for President & Vice President; the highest number appointing the former, the next, the latter. To say nothing of the different services (except in a rare contingency) which are to be performed by them, occasional transpositions would take place violating equally the mutual consciousness of the individuals, & the public estimate of their comparative fitnesses.

Having thus made the remarks to which your communication led with a frankness which I am sure you will not disapprove, whatever errours you may find in them, I will sketch, for your consideration, a substitute which has occured to myself for the faulty part of the Constitution in question.

“The Electors to be chosen by districts, not more than two by any one district; and the arrangement of the districts not to be alterable within the period of previous to the election of President. Each Elector to give two votes: one naming his first choice, the other his next choice. If there be a majority of all the votes on the first list for the same person, he, of course to be President: if not, & there be a majority (which may well happen) on the other list for the same person, he then to be the final choice: if there be no such majority on either list, then a choice to be made by joint ballot of the two Houses of Congress, from the two names having the greatest number of votes on the two lists taken together.” Such a process would avoid the inconveniency of a second resort to the Electors; and furnish a double chance of avoiding an eventual resort to Congress. The same process might be observed in electing the Vice President.

Your letter found me under some engagements which have retarded a compliance with its request, and may have also rendered my view of the subject presented in it, more superficial than I have been aware. This consideration alone would justify my wish not to be brought into the public discussion. But there is another in the propensity of the moment to view everything, however abstract from the Presidential election in prospect, thro’ a medium connecting it with that question: a propensity the less to be excused as no previous change of the Constitution can be contemplated; and the more to be regretted as opinions & commitments formed under its influence may become settled obstacles at a practicable season. Be pleased to accept the expression of my esteem & my friendly respects

DBQ Excerpt
Not Specifically for DBQs

"You could live in here during a zombie apocalypse. There's a, uh - "
(points at futon, forgets word)
- Brittany

"Why would you want to be in a school during a zombie apocalypse?"
- Margie