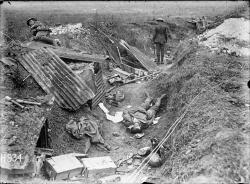 This account from regarding trench warfare in World War I comes from British officer F. Jourdain as part of an oral history project from the Imperial War Museum.1 These audio recordings were produced in 1990.

I wondered what was happening because anything that went off, bang, over there somewhere made me jump. And I suddenly realised I’d got this thing called shell shock, which I’d never believed in before. Simply I think because of all these shells going off quite close to one, there was a lot of concussion about it. And I realised this and I didn’t know what to do because I wasn’t going to tell anybody about it and I didn’t tell anybody about it. Fortunately after I should say three days, or it may have been more, but something like that, it disappeared. But was I relieved because I mean you felt, ‘Am I coward or what?’ I mean, this is dreadful I mean anything that goes pop makes one dither. And of course that is what shell shock is, I think. People always thought it was cowardice, you see. Because people got shell shock in a front line trench – perfectly legitimately no doubt – and would start, I suppose they got dithery, but at any rate anything that went off bang alarmed them. And eventually they presumably got home; it was one way of getting home. You see, people if they realised, like I did, that there was something wrong you’d do your best to hide it. Because you’re scared thinking that you’re being a coward.