The Speech of Urban II at the Council of Clermont, 1095 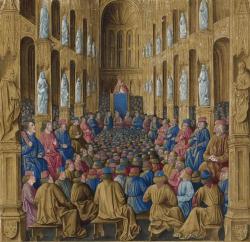 The Council of Clermont was a meeting of about 300 clerics and laymen in 1095, used to set the goals, practices, and doctrine of the Church, in particular to set the stage for the First Crusade. This type of meeting is called a 'synod.'

This text is from the Medieval History Sourcebook.1 Annotations and emphasis are mine.

From Fulcher of Chartres2

"Most beloved brethren: Urged by necessity, I, Urban, by the permission of God chief bishop and prelate over the whole world,3 have come into these parts as an ambassador with a divine admonition to you, the servants of God. I hoped to find you as faithful and as zealous in the service of God as I had supposed you to be. But if there is in you any deformity or crookedness contrary to God's law, with divine help I will do my best to remove it. For God has put you as stewards over his family to minister to it. Happy indeed will you be if he finds you faithful in your stewardship. You are called shepherds; see that you do not act as hirelings. But be true shepherds, with your crooks4 always in your hands. Do not go to sleep, but guard on all sides the flock committed to you. For if through your carelessness or negligence a wolf carries away one of your sheep, you will surely lose the reward laid up for you with God. And after you have been bitterly scourged with remorse for your faults-, you will be fiercely overwhelmed in hell, the abode of death. For according to the gospel you are the salt of the earth [Matt. 5:13]. But if you fall short in your duty, how, it may be asked, can it be salted? O how great the need of salting! It is indeed necessary for you to correct with the salt of wisdom this foolish people which is so devoted to the pleasures of this -world, lest the Lord, when He may wish to speak to them, find them putrefied by their sins unsalted and stinking. For if He, shall find worms, that is, sins, In them, because you have been negligent in your duty, He will command them as worthless to be thrown into the abyss of unclean things. And because you cannot restore to Him His great loss, He will surely condemn you and drive you from His loving presence. But the man who applies this salt should be prudent, provident, modest, learned, peaceable, watchful, pious, just, equitable, and pure. For how can the ignorant teach others? How can the licentious make others modest? And how can the impure make others pure? If anyone hates peace, how can he make others peaceable ? Or if anyone has soiled his hands with baseness, how can he cleanse the impurities of another? We read also that if the blind lead the blind, both will fall into the ditch [Matt. 15:14]. But first correct yourselves, in order that, free from blame , you may be able to correct those who are subject to you. If you wish to be the friends of God, gladly do the things which you know will please Him. You must especially let all matters that pertain to the church be controlled by the law of the church. And be careful that simony does not take root among you, lest both those who buy and those who sell [church offices] be beaten with the scourges of the Lord through narrow streets and driven into the place of destruction and confusion. Keep the church and the clergy in all its grades entirely free from the secular power. See that the tithes that belong to God are faithfully paid from all the produce of the land; let them not be sold or withheld. If anyone seizes a bishop let him be treated as an outlaw. If anyone seizes or robs monks, or clergymen, or nuns, or their servants, or pilgrims, or merchants, let him be anathema [that is, cursed]. Let robbers and incendiaries and all their accomplices be expelled from the church and anthematized. If a man who does not give a part of his goods as alms is punished with the damnation of hell, how should he be punished who robs another of his goods? For thus it happened to the rich man in the gospel [Luke 16:19]; he was not punished because he had stolen the goods of another, but because he had not used well the things which were his.

"You have seen for a long time the great disorder in the world caused by these crimes. It is so bad in some of your provinces, I am told, and you are so weak in the administration of justice, that one can hardly go along the road by day or night without being attacked by robbers; and whether at home or abroad one is in danger of being despoiled either by force or fraud.5 Therefore it is necessary to reenact the truce, as it is commonly called, which was proclaimed a long time ago by our holy fathers. I exhort and demand that you, each, try hard to have the truce kept in your diocese. And if anyone shall be led by his cupidity or arrogance to break this truce, by the authority of God and with the sanction of this council he shall be anathematized."

[Fulcher of Chartres:] After these and various other matters had been attended to, all who were present, clergy and people, gave thanks to God and agreed to the pope's proposition. They all faithfully promised to keep the decrees.

Then the pope said that in another part of the world Christianity was suffering from a state of affairs that was worse than the one just mentioned.

"Although, O sons of God, you have promised more firmly than ever to keep the peace among yourselves and to preserve the rights of the church, there remains still an important work for you to do. Freshly quickened by the divine correction, you must apply the strength of your righteousness to another matter which concerns you as well as God. For your brethren who live in the east are in urgent need of your help, and you must hasten to give them the aid which has often been promised them. For, as the most of you have heard, the Turks and Arabs have attacked them and have conquered the territory of Romania [the Greek empire] as far west as the shore of the Mediterranean and the Hellespont, which is called the Arm of St. George. They have occupied more and more of the lands of those Christians, and have overcome them in seven battles. They have killed and captured many, and have destroyed the churches and devastated the empire. If you permit them to continue thus for awhile with impurity, the faithful of God will be much more widely attacked by them. On this account I, or rather the Lord, beseech you as Christ's heralds to publish this everywhere and to persuade all people of whatever rank, foot-soldiers and knights, poor and rich, to carry aid promptly to those Christians and to destroy that vile race from the lands of our friends. I say this to those who are present, it meant also for those who are absent.

"All who die by the way, whether by land or by sea, or in battle against the pagans, shall have immediate remission of sins.6 This I grant them through the power of God with which I am invested. O what a disgrace if such a despised and base race, which worships demons, should conquer a people which has the faith of omnipotent God and is made glorious with the name of Christ! With what reproaches will the Lord overwhelm us if you do not aid those who, with us, profess the Christian religion! Let those who have been accustomed unjustly to wage private warfare against the faithful now go against the infidels and end with victory this war which should have been begun long ago. Let those who for a long time, have been robbers, now become knights. Let those who have been fighting against their brothers and relatives now fight in a proper way against the barbarians. Let those who have been serving as mercenaries for small pay now obtain the eternal reward. Let those who have been wearing themselves out in both body and soul now work for a double honor. Behold! on this side will be the sorrowful and poor, on that, the rich; on this side, the enemies of the Lord, on that, his friends. Let those who go not put off the journey, but rent their lands and collect money for their expenses; and as soon as winter is over and spring comes, let hem eagerly set out on the way with God as their guide."

...we're going to need a bank to pay for my BACK SURGERY for carrying this debate!