The Treaty of Versailles (excerpts) 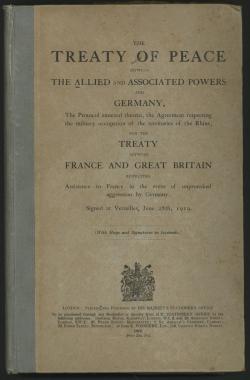 The Treaty of Versailles, translated into English. Original source.

On June 28,1919, the Allied powers presented the Treaty of Versailles to Germany for signature. The following are the key territorial and political clauses.1

Article 22. Certain communities formerly belonging to the Turkish Empire have reached a stage of development where their existence as independent nations can be provisionally recognised subject to the rendering of administrative advice and assistance by a Mandatory [i.e., a Western power] until such time as they are able to stand alone. The wishes of these communities must be a principal consideration in the selection of the Mandatory.

Article 42. Germany is forbidden to maintain or construct any fortifications either on the left bank of the Rhine or on the right bank to the west of a line drawn 50 kilometres to the East of the Rhine.

Article 45. As compensation for the destruction of the coal mines in the north of France and as part payment towards the total reparation due from Germany for the damage resulting from the war, Germany cedes to France in full and absolute possession, with exclusive right of exploitation, unencumbered and free from all debts and charges of any kind, the coal mines situated in the Saar Basin....

Article 49. Germany renounces in favor of the League of Nations, in the capacity of trustee, the government of the territory defined above. At the end of fifteen years from the coming into force of the present Treaty the inhabitants of the said territory shall be called upon to indicate the sovereignty under which they desire to be placed. Alsace­Lorraine. The High Contracting Parties, recognizing the moral obligation to redress the wrong done by Germany in 1871 both to the rights of France and to the wishes of the population of Alsace and Lorraine, which were separated from their country in spite of the solemn protest of their representatives at the Assembly of Bordeaux, agree upon the following....

Article 51. The territories which were ceded to Germany in accordance with the Preliminaries of Peace signed at Versailles on February 26, 1871, and the Treaty of Frankfort of May 10, 1871, are restored to French sovereignty as from the date of the Armistice of November 11, 1918. The provisions of the Treaties establishing the delimitation of the frontiers before 1871 shall be restored.

Article 119. Germany renounces in favor of the Principal Allied and Associated Powers all her rights and titles over her overseas possessions.

Article 156. Germany renounces, in favour of Japan, all her rights, title and privileges . . . which she acquired in virtue of` the Treaty concluded by her with China on March 6, 1898, and of all other arrangements relative to the Province of Shantung.

Article 159. The German military forces shall be demobilised and reduced as prescribed hereinafter.

Article 160. By a date which must not be later than March 31, 1920, the German Army must not comprise more than seven divisions of infantry and three divisions of cavalry. After that date the total number of effectives in the Army of the States constituting Germany must not exceed 100,000 men, including officers and establishments of depots. The Army shall be devoted exclusively to the maintenance of order within the territory and to the control of the frontiers. The total effective strength of officers, including the personnel of staffs, whatever their composition, must not exceed four thousand....