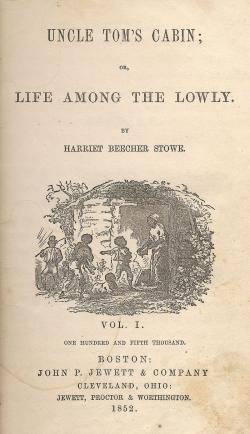 Title page for Volume I of the first edition of Uncle Tom's Cabin (1852). Original source.

Background information: Harriet Beecher Stowe came from a family of prominent speakers and reformers.  Stowe's father Lyman Beecher was perhaps the most renowned minister of the Second Great Awakening.  Her brothers, Henry Ward and Edward Beecher, followed in their father's footsteps, becoming accomplished and famous clergymen and reformers in their own right. Harriet's older sister Catharine was a leading advocate of women's education.
Uncle Tom's Cabin was Stowe's own contribution to American reform. Published in serial form in the National Era between June 1851 and April 1852 and as a book early in 1852, Uncle Tom's Cabin became an instantaneous and phenomenal success.  Portraying slavery as a threat to both Christianity and domesticity, Stowe's novel helped galvanize anti-slavery sentiment in the North.  In the following excerpt from chapter 23, the two St. Clare brothers debate the possible onslaught of a "San Domingo hour" in the South after witnessing the young Henrique beat the slave Dodo.

The scene of the beating had been witnessed by the two brothers St. Clare, from another part of the garden.